The City of Kure has a long history with ship building. It is situated across a bay from the The Japan Self Defence Force Maritime Officer Candidate School I visited just about a year ago.

There is a museum dedicated to the most celebrated, but ill-fated battleship of the Imperial Navy during the WWII - Yamato, which was built at a factory in this city. Here's the link to the museum.

1/10 scale model of Yamato exhibited at the museum. 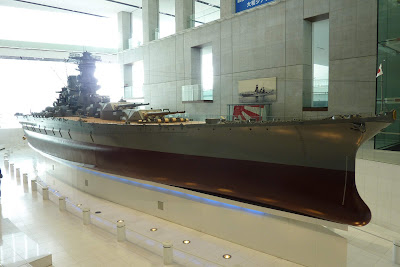 Some of the original design drawings are displayed at the museum. 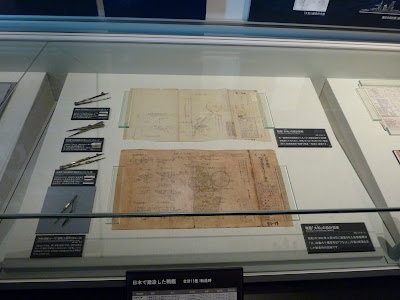 The battleship did not travel far from the base on its last voyage on a mission to travel to Okinawa in April of 1945. The map indicates where it left (Kure) and where it was sunk (marked by X). 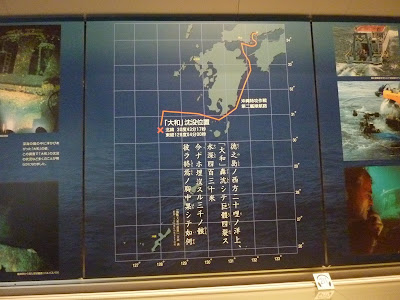 The model of how the battleship rests at the bottom of the sea - recreated by the findings from the 1999 search mission. 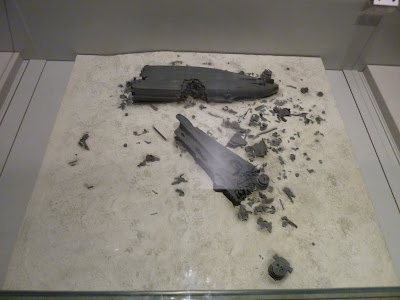 At the museum also exhibits other WWII materials, a Zero Fighter plane and submarines. 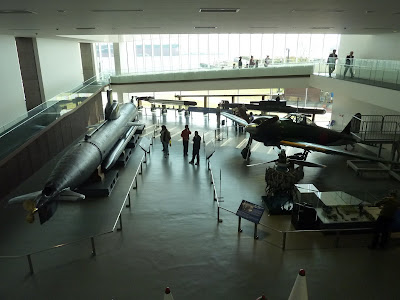 Posted by datadawak at 9:17 PM

I haven't been to your blog in a while, I like the new look.

Somehow any mention of the Battleship Yamato reminds me of Admiral Yamamoto--not just because the names are pretty similar, but also because the Admiral served on her in the battle of Midway.

One of my favorite novels Neal Stephenson’s Cryptonomicon, takes place in modern times with flashbacks to WWII and recounts the ambush of the Admiral. The quote from the book contains some salty language, so it is in the next comment (maybe I'll even edit-out the bad words) in case you want to delete it.

To those Army ****heads, [the decision not to deliver the declaration of war until after the Pearl Harbor attack] is nothing — just a typo, happens all the time. Isoroku Yamamoto has given up on trying to make them understand that the Americans are grudge-holders on a level that is inconceivable to the Nipponese, who learn to swallow their pride before they learn to swallow solid food. Even if he could get Tojo and his mob of shabby, ignorant thugs to comprehend how pissed off the Americans are, they’d laugh it off. What’re they going to do about it? Throw a pie in your face, like the Three Stooges? Ha, ha, ha! Pass the sake and bring me another comfort girl!

Isoroku Yamamoto spent a lot of time playing poker with Yanks during his years in the States, smoking like a chimney to deaden the scent of their appalling aftershave. The Yanks are laughably rude and uncultured, of course; this hardly constitutes a sharp observation. Yamamoto, by contrast, attained some genuine insight as a side-effect of being robbed blind by Yanks at the poker table, realizing that the big freckled louts could be dreadfully cunning. Crude and stupid would be okay — perfectly understandable, in fact.

But crude and clever is intolerable; this is what makes those red headed ape men extra double super loathsome. Yamamoto is still trying to drill the notion into the heads of his [Army] partners in the big Nipponese scheme to conquer everything between Karachi and Denver.... Come on guys, Yamamoto keeps telling them, the world is not just a big Nanjing. But they don’t get it. If Yamamoto were running things, he’d make a rule: each Army officer would have to take some time out from bayoneting Neolithic savages in the jungle, go out on the wide Pacific in a ship, and swap 16-inch shells with an American task force for a while. Then maybe, they’d understand they’re in a real scrap here.

This is what Yamamoto thinks about, shortly before sunrise, as he clambers onto his Mitsubishi G4M bomber in Rabaul, the scabbard of his sword whacking against the frame of the narrow door. The Yanks call this type of plane “Betty,” an effeminatizing gesture that really irks him. Then again, the Yanks name even their own planes after women, and paint naked ladies on their sacred instruments of war! If they had samurai swords, Americans would probably decorate the blades with nail polish....

They are approaching the Imperial Navy airbase at Bougainville, right on schedule, at 9:35. A shadow passes overhead and Yamamoto glances up to see the silhouette of an escort, way out of position, dangerously close to them. Who is that idiot? Then the green island and the blue ocean rotate into view as his pilot puts the Betty into a power dive....

They enter the jungle in level flight, and Yamamoto is astonished how far they go before hitting anything big. Then the plane is bludgeoned wide open by mahogany trunks, like baseball bats striking a wounded sparrow, and he knows it’s over.... As his seat tears loose from the broken dome and launches into space, he grips his sword, unwilling to disgrace himself by dropping his sacred weapon, blessed by the emepror, even in this last instant of his life....

He realizes something: The Americans must have done the impossible: broken all of their codes. That explains Midway, it explains the Bismarck Sea, Hollandia, everything. It especially explains why Yamamoto — who ought to be sipping green tea and practicing calligraphy in a misty garden — is, in point of fact, on fire and hurtling through the jungle at a hundred miles per hour in a chair, closely pursued by tons of flaming junk. He must get word out! The codes must all be changed! This is what he is thinking when he flies head-on into a hundred-foot-tall Octomelis sumatrana.

Thank you for your comments. General Yamamoto was of course the supreme commander of the Imperial Japanese Navy for which Yamato was the Lead Ship during WWII.