Today is the one year anniversary of 3.11 Disaster that struck Japan.  I wrote about my experience one year ago.

Today, as I ran in Inokashira Park, there were many people gathered for a demonstration calling for the government to take more action for the relief of the victims and against nuclear power plants. 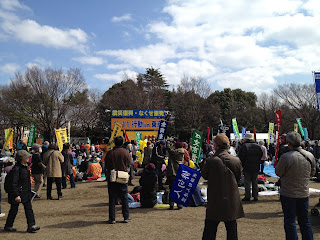 Later on, they marched the streets of Kichijoji. 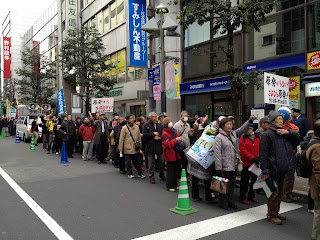 There were many TV shows about it.  Here, attendees of a memorial ceremony (attended by our Emperor and Empress) bow to do a moment of silence exactly a year after the original earthquake (2:46 PM Japan time). 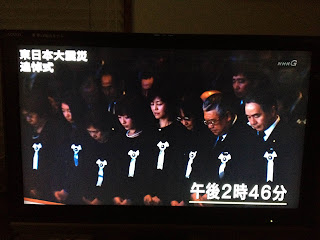 Here's another shot of the TV screen - live from Rikuzentakata. Still a large ship that floated into the city by the tsunami remains. 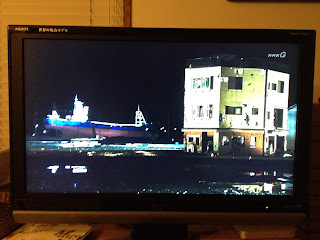 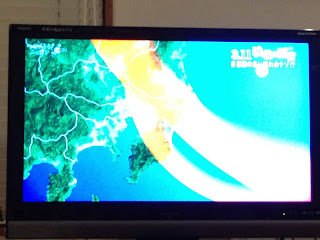 From the the earthquake, tsunami, and nuclear fall-out of one year ago, Japan suffered over 17,000 deaths, some 27,000 people injured and as of today, 3,155 people are still missing and 343,935 people are evacuated from the affected areas.

Here in Japan, we are still coping with the aftermath of the terrible disaster.
Posted by datadawak at 9:42 PM

I wonder at the high level of opposition to nuclear power in Japan.

There were tens of thousands of deaths from the earthquake and tsunami but so far zero deaths or even illness from radiation.

My guess and it is really only a guess, is that before the disaster, they tolerated but did not like nuclear power. Now, it is intolerable and must go.

ps. Congratulations to Susan, I heard she ran the Tokyo Marathon!

About radiation, there are some exposures to radiation by workers at the Fukushima plant that lead to deaths and complications. They did not even wear boots to go into the area where radioactive water was, so their feet were completely soaked in it. Also, some decided to smoke in the plant and took their masks off to do so where radioactive steams filled the building. We were just amazed to learn of their carelessness.

That was about a year ago. Since we cannot trust what the government has told us, I am afraid of effects in years to come.